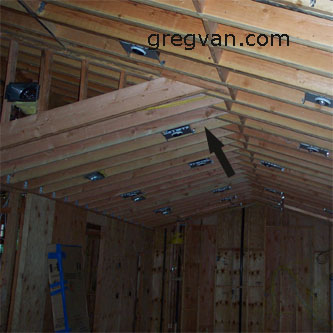 If you have a room that’s half vaulted, there are many options available to create the perfect feel. For example, you can place the dining table directly under the vault connection to create a sense of separation. Alternatively, you can use a track lighting system that extends out from the join. The light will reflect off the roof, creating a unique effect. You can also use artificial lighting, such as uplighters or wall washers.

A tray ceiling adds a unique element to a room’s design. They’re a great way to add texture to a flat ceiling, and they can be combined with other design elements and lighting to make a unique feature in the room. A similar design is the stepped ceiling, which has multiple layers of recessed trays that rise in height. This type of ceiling can span the entire room, or be used as an architectural accent.

Tray ceilings are most popular in larger rooms and commercial spaces, where they provide more visual space than a flat ceiling. Tray ceilings are usually a little bit deeper than the rest of the ceiling, ranging from one to two feet in depth. Depending on the type of home and the height of the ceiling, you can choose to raise or lower the tray ceiling to suit the look and feel of the room.

A half barrel vault is a vaulted structure. This design is often used in underground spaces, such as sewers. It has been used in buildings and civil engineering for thousands of years. Some of the first examples date back to ancient Egypt and Mesopotamia. The Romans and Persians were also familiar with barrel vaulting. Barrel vaults evolved from the need to roof buildings. They were constructed from fired bricks amalgamated with claymortar. They also were used in ancient Egyptian tombs and temples.

Half barrel vaulted ceilings are easy to install. They require only simple tools and basic knowledge of construction. There are many styles of barrel vaults, and not all are built equal. They differ in the degree of curvature required.

A groin vault is a vault with a square plan that can span any length. This type of vaulting was used extensively in great Roman public baths. Even today, large fragments of such buildings still exist. One example is the Baths of Diocletian in Rome, which span 26 metres, and was converted into a church by Michelangelo.

A groin vaulted ceiling looks quite unique and will impress your visitors. Unlike other types of vaults, which have straight, 90-degree angles, a groin vault has a series of intersecting curves that create a complex look.

Cathedral ceilings have a great deal of potential for decorating a home. Not only do they provide a sense of space and airiness, but they also create a nice line of symmetry. Choosing a light color to paint the ceiling and walls will help tie them together and make the room seem larger. The overall look of a cathedral ceiling will make any room feel serene and comfortable.

Cathedral ceilings are also energy efficient. The extra height allows for tall windows and skylights to be installed. The extra height also makes the room feel airier and allows more natural light to enter. This is especially useful in small homes, where it can make even the smallest rooms seem larger.

A shiplap ceiling is a great choice for modern homes, as it can be painted in varying tones. It gives a room a sense of depth and dimension, making it feel cozier. Another advantage of a shiplap ceiling is its boldness. For example, a black shiplap ceiling on a white wall is an unusual choice, but it looks fantastic.